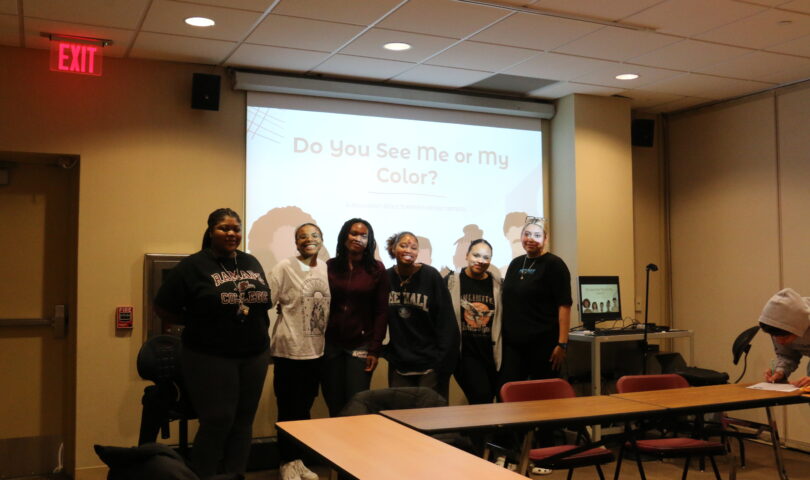 The Students of Caribbean Ancestry (SOCA) hosted a discussion about tokenism at Ramapo this past Tuesday. Do You See Me or My Color? consisted of two parts: a presentation and a series of questions for attendees to answer through a group conversation.

One of the first slides defined tokenism as “the practice of making a symbolic effort to be inclusive of members of minority groups.”

To expand upon this definition, Hunter and Sanchez showed a YouTube video titled “Multicultural Essentials: Tokenism.” Nikki Lerner, a self-described “singer, author, speaker and culture coach,” explained tokenism occurs when a trait such as race or gender is treated as a superficial asset.

For example, a boss who states the workplace needs to hire more people of a certain ethnicity but does not elaborate on why is laying the groundwork for the new employees to be tokenized. Those employees’ peers will define them by that trait. To avoid this, Lerner stressed careful thought before speech. “If the language is only around these characteristics, it’s going to be very easy for you to tokenize somebody.”

Lerner also advised viewers to “see people as whole people” and “deepen [their] relationships” to reduce the chance of facilitating tokenism.

After the video ended, the presenters applied the established terms and sentiments to the culture at Ramapo, where 62% of the student population is white. College Factual ranks Ramapo as below average for its racial/ethnic diversity.

Attendees were able to voice their personal thoughts and experiences with this during the discussion portion.

The first discussion question was simple: “Do we think that Ramapo is tokenistic?”

One student expressed discomfort regarding what she saw as the disproportionate representation of white students in the college’s promotional materials and the photos on its website. Photos and videos that did include Black students tended to select the same few. She said, “I feel like they can choose when they want to use us.”

Another attendee shared the story of her struggle with teaching a professor the difference between being Guyanese and being African-American.

Another respondent seconded the point and added nuance to the conversation. “I feel like it’s also important not to put too much emphasis on diversity because that’s how it becomes tokenism.” She continued to explain how constant reminders that President Jebb was “the first woman president” of Ramapo led to people who did not witness her speeches not knowing anything else about her.

Comparisons between the current and previous administrations were complex. “Just to get [former president] Mercer in the BSU room alone was a struggle,” one attendee recalled. Students in attendance seemed to agree that Jebb had already surpassed Mercer in terms of acknowledging the needs of Ramapo’s students of color.

One of the final discussion questions asked whether or not the college viewed Black students as a monolith.

“They don’t even know that we’re different… better yet, we’re invisible,” said one respondent.