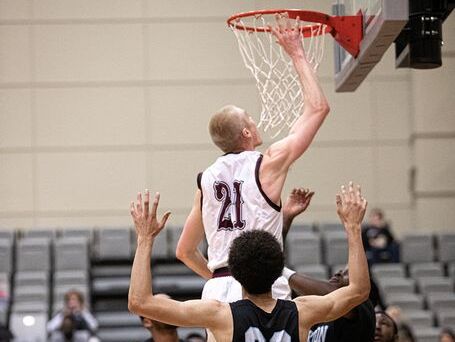 The two teams battled back and forth the whole first half with neither team able to lead by more than four points. In the second half, the Roadrunners went on a 15-3 run to take a 63-53 lead with two minutes left in the game. With one minute left on the clock, the Gryphons shrunk the lead to seven, but the Roadrunners wrapped up the game on a 4-1 run for the 68-58 win.

The Ramapo defense forced 23 Sarah Lawrence turnovers leading to 34 points for the Roadrunners. Five Roadrunners also scored in double figures in the game.

The Roadrunners played another non-conference game on Saturday, Nov. 19 when they hosted Purchase College at home. Ramapo won 78-67.

The team held off a determined Purchase team down the stretch to come away with their second victory of the season. With under 12 minutes left to play in the second half, the Roadrunners held a 57-45 lead after a made basket from Myers.

Ramapo scored their next five points at the free throw line as they led 68-62 with 1:51 left to play. The Panthers’ James Brady sank a pair of free throws before Ramapo went on a 10-3 run to close out the game, leading to a 78-67 victory. The Ramapo defense forced 23 Panther turnovers that led to 26 points for the Roadrunners.

Gorman led Ramapo in scoring with a career-high 28 points as he finished 8-14 from the field and 10-11 from the free throw line while also contributing with two three-pointers. He also recorded a team-high five steals while adding two assists and four rebounds.

In addition, Ramapo’s Brown posted 17 points while he finished 8-8 from the free throw line and 4-5 from the field. Myers led the team with nine rebounds while he added 13 points, one steal and one blocked shot.

The Roadrunners then returned to action again on Tuesday, Nov. 22 as they opened up New Jersey Athletic Conference play against Rutgers-Newark University, winning their third straight game, 55-52.

Just like the previous two match-ups the game came down to the final buzzer. The Roadrunners took a two-point lead into the locker room at halftime before the Scarlet Raiders eventually took the lead in the second half.

Rutgers had a six-point lead before Ramapo hit back-to-back three-pointers from Corbo and Elijah Barlow to tie the game at 41 with just over 10 minutes remaining in the game. The two teams continued trading baskets down the stretch.

Following back-to-back timeouts, Kelvin Marshall scored a basket for Rutgers with under a minute to play as Ramapo held a one-point lead, 53-52. The Scarlet Raiders did not convert on a pair of free throws with 15 seconds remaining before Shane Rooney put down a dunk for the Roadrunners with seven seconds left in the game for the 55-52 score. A last-second three-pointer from Rutgers did not hit the mark as the Roadrunners held on for the victory.

The Roadrunners were led by Rooney with 13 points and seven rebounds while Gorman added 11 points and four rebounds. Gorman was tied with Barlow as they led the team with five assists each. Barlow also contributed with eight points including two three-pointers and a team-high four steals.

Corbo added eight points, three assists, three rebounds and three steals while Brown posted seven points, four rebounds and one assist. The Roadrunners shot 40% from the field, 43% from beyond the three-point line and 100% from the free throw line.

In comparison to the last three games, Ramapo cruised to an easy victory against non-conference opponent City College of New York (CCNY) on Monday night, 85-54, their fourth consecutive win.

Ramapo had five players in double figures in the win. Myers had a season-high 15 points, Gorman added 13, Corbo followed with 12, Barlow had a career-high of 11 and Rooney had eight points along with 10 rebounds.

Together the Roadrunners scored 32 points off of CCNY turnovers and never trailed throughout the game. They return to action Saturday, Dec. 3, when they host Stockton University at 1 p.m.