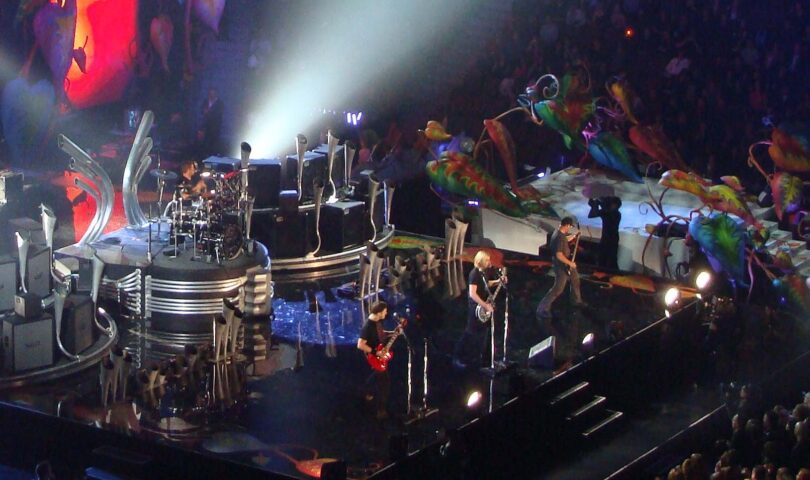 Nickelback is one of the most influential rock bands from the late 90s through the early 2000s and is also well known for its popular hits such as “How You Remind Me” and “Photograph.” The group strikes again with their latest album, “Get Rollin’,” which was released on Nov. 18 and includes 11 new songs, including its leading single “San Quentin.”

The defining characteristic of their music is the loud, flamboyant and raspy vocals provided by lead lyricist Chad Kroeger. Nickelback is heavily infamous due to their sharp rise to fame and their perception on social media by some of the biggest influencers during the early 2000s.

The one aspect of Nickelback songs that draws me in is their ability to compose a meaningful story through their lyrics while maintaining the core structure of a heavy and alternative rock melody. Like most members of Gen-Z, I grew up listening to Nickelback endlessly on the car radio. Songs such as “Someday,” “Gotta Be Somebody” and “Far Away” were among the most memorable and my personal favorites. Regardless of the criticism the band has received throughout its ongoing tenure, they have produced some of my favorite songs of all time.

Upon initial impressions of the entire album, one of the best ways to describe the songs featured in the album is “taking a blast into the past.” Heavy and alternative rock has certainly fallen out of favor over the past decade. The songs featured in this album serve as a mini-revival of the genre.

When deconstructing an individual song, the first component many put their focus on is the instrumentals and beats. Generally, the songs in the album feature similar instrumental styles and rhythms to those found in songs of the late 90s.

A characteristic of Nickelback is their ability to diversify tones and emotions expressed in each song. The “Get Rollin’” album is no different. Certain songs aim to portray a more relaxed or romantic tone while others offer a more upbeat, harsh vibe. This range in style is demonstrated from the heavy, ferocious attitude of “Vegas Bomb,” to the softer, melodic inflection in “How Does Heaven Know You’re Missing?”

“Get Rollin’” is a refreshing change of sound to today’s mainstream tunes. The band’s capability to stay true to their roots and unwillingness to conform to current mainstream music is very much appreciated. The songs featured in this album do not necessarily push the needle forward in the realm of alternative rock music, as it was difficult to pinpoint any characteristics of this album that separates it from Nickelback’s other works.

Overall, “Get Rollin’” is an album made for those who are looking to reminisce on the days when modern rock was at its peak. Though this may not appeal to the average listener, especially to the newer generation, I am a fan of Nickelback’s latest work as a whole and am looking forward to more releases within the rock genre.