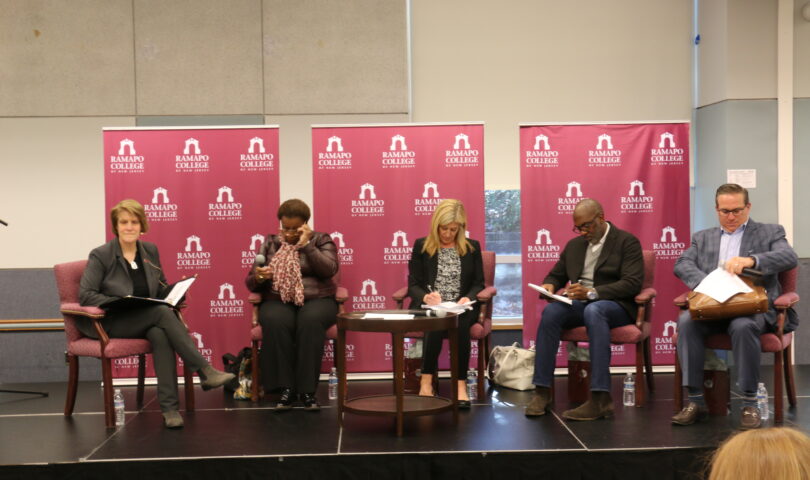 As part of the Presidential Speaker Series, President Cindy Jebb invited Alison Banks-Moore, Kristine Denning, Keith Dawkins and Peter Seminara for a discussion panel on leadership in the Pavilion on Monday, Nov. 28. The title of the panel was “Learning to Unlearn: Building & Leading Teams in the 21st Century” and focused on pre-material from a Forbes article and an article from the Journal of Organizational Change Management. All four panelists are Ramapo alum and currently serve on the Ramapo College Foundation Board of Governors.

Additionally, they are all leaders in the fields they serve. Banks-Moore is vice president and chief diversity officer for Horizon Blue Cross, Denning is a partner at Harwood Lloyd’s Insurance Litigation department and leads her team, Dawkins is the CEO of Rockhill Media Ventures and current president of the Harlem Globetrotters and Herschend Entertainment Studios, and Seminara is an executive director and private wealth advisor for Morgan Stanley. The discussion focused on how the panelists have unlearned old habits and had to learn and adjust as they navigate a post-pandemic world.

“With respect to unlearning and relearning, it’s all about pivoting. It’s all about being open to the possibilities,” Banks-Moore said in response to Jebb’s question about empowering teams to unlearn and learn. Banks-Moore said she often asks employees “Has it been successful?” when employees try to justify that things have always been done a certain way. She explained that people should not be afraid of failure when it comes to unlearning since failure is “part of the maturation process of becoming a professional.”

Seminara spoke about his personal experience of having to pivot in his professional career. When Jebb asked about major crises in the past few decades, like 9/11, Seminara said he saw a change in corporate America. When he worked in one of the towers on Wall Street, one focused on profitability. He said post-9/11, there was “a human element to our fears at work” that created camaraderie in his field of work.

Dawkins gave an example of unlearning with his recent position with the Globetrotters. When he took the job in January, he was navigating a post-pandemic world. He said the Globetrotters had viewed themselves as a “touring group” and the business model reflected that. When the pandemic began, their business essentially shut down because no one was going to live events.

Dawkins said he has been trying to change the business model to be more sustainable. He referred to his work as “flying the plane and fixing it at the same time.” With the roles he has had in media, he said he has had to constantly learn about new technologies and adapt strategies to reach target audiences. That same mindset is what he said he is trying to bring to the Globetrotters.

Denning talked about being on top of changing norms and different kinds of biases and how human connection is the way to address them. Being aware of differences in others, she said, is how you can connect with others and guide them as a leader.

The panelists also spoke about leadership directives outlined in the Forbes article, like asking questions, being humble, being vulnerable and embracing discomfort.

“I like to consciously remind myself of the times when I was really done with this stuff and what was going on in this world that I didn’t know that I was moving into,” Dawkins said. He gave an example of the current state of the movie industry and compared it to how it used to be when he entered media. He said you need to be open to adapting and not keep your head in the sand.

Banks-Moore spoke about the new CEO at Horizon Blue Cross during the pandemic, and how the need to have open discussion was important.

“We just continued taking that course of action, and continually challenging ourselves and that’s the expectation of my CEO, to challenge one another respectfully, to have those difficult conversations… Let’s talk about it until we get to a point where we all agree this is the course we’re taking,” she said.

Denning highlighted her earlier point about social interaction by adding to Banks-Moore’s point. She talked about her conscious efforts to bring people together during the pandemic even while everyone was at home.

The discussion ended with the panelists sharing their thoughts on Ramapo and how their experiences prepared them for their careers along with a brief Q&A with the audience.