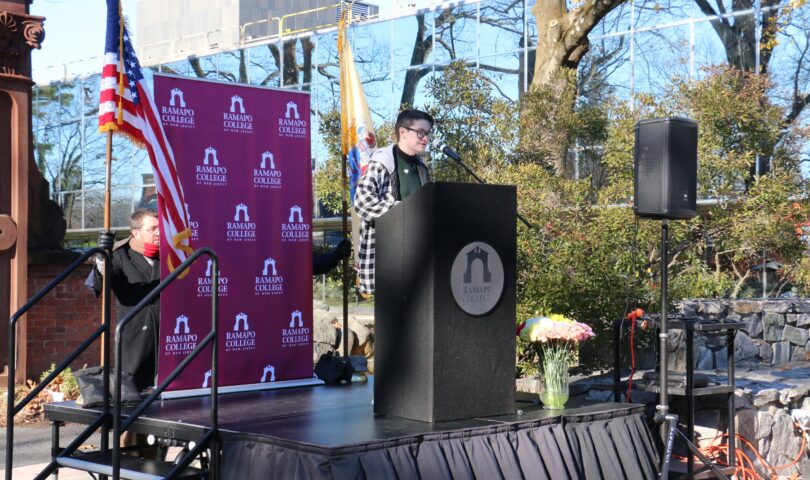 Ramapo honored Transgender Day of Remembrance (TDOR) on Nov. 21 with a memorial service for victims whose lives were cut short by transphobia. The proceedings were heavily shadowed by the mass shooting at Club Q, a gay club in Colorado Springs, that occurred less than 24 hours before the service.

The coordinator of Ramapo’s Office of Violence Prevention, Marie-Danielle Attis, was first to take the stage set up by the Arch and address the grieving crowd.

“Today is a tough one, but we’re going to get through it together,” she said. She cited the recent attack at Club Q as evidence for the need to keep holding TDOR 23 years after the original vigil.

According to the Gay & Lesbian Alliance Against Defamation, TDOR was first held in 1999 by transgender advocate Gwendolyn Ann Smith “to honor the memory of Rita Hester, a transgender woman who was killed in 1998. The vigil commemorated all the transgender people lost to violence since Hester’s death.”

President Cindy Jebb maintained the tradition by leading a moment of silence. “Let us remember them by committing to do and be better,” she said.

Bell also recognized the five lives lost at the Club Q shooting: Daniel Davis Aston, Derrick Rump, Kelly Loving, Ashley Paugh and Raymond Green Vance. He praised the bravery of the two patrons who subdued the gunman, army veteran Richard M. Fierro and a transgender woman whose identity has not been disclosed.

“It is important that we recognize this as nothing less than an act of transphobic and homophobic violence,” Bell said. “Now more than ever, we must use our voices to speak out against bigotry.”

Jebb presented Bell with a presidential coin at the end of the ceremony.

Signs with photos and bios of the 37 victims lined a path in the Grove. Attendees participated in the vigil by adorning the memorials with flowers.

Siblings and Ramapo seniors Allison and Kirby Steele lingered after most of the crowd had dispersed. When asked why they attended, their answers upheld a shared set of values.

“[I wanted] to be a good and supportive ally for the people who need it,” Allison said. “There’s a lot that I can’t personally relate to because I’m a cis person, but I still think it’s important to be there for people and show them kindness and sympathy.”

Kirby’s motivation was also shaped by his identity. “It’s very important to me as a trans man to be in touch with as much of my community as I can… today in particular because of the Club Q attack. I think the thing that actually brought me here out of bed today was thinking about the patrons who apprehended the attacker to keep as many as their fellow clubbers as safe as they possibly could. That’s the energy I’m trying to embody to get through the day today.”

He recalled past efforts that went into making Ramapo more inclusive. “It’s been a long fight. I remember a time when the original trans outreach coordinator, my good friend Parker Rogers, would recount to me stories of constantly going to his boss every day and crying out of frustration trying to get the chosen name policy through.”

The Used Name Policy was passed after Rogers graduated and Kian Concert, now a Ramapo alum, took on the position. According to its website, the policy “provides a pathway for students to be officially recognized, included, and given the opportunity to identify themselves as they wish” regardless of the status of their legal name.

Kirby views Ramapo participating in TDOR as a welcoming sign for its trans students. “I think it’s really important to have these discussions and to have that accountability on campus to know that somebody is finally going to listen to us.”