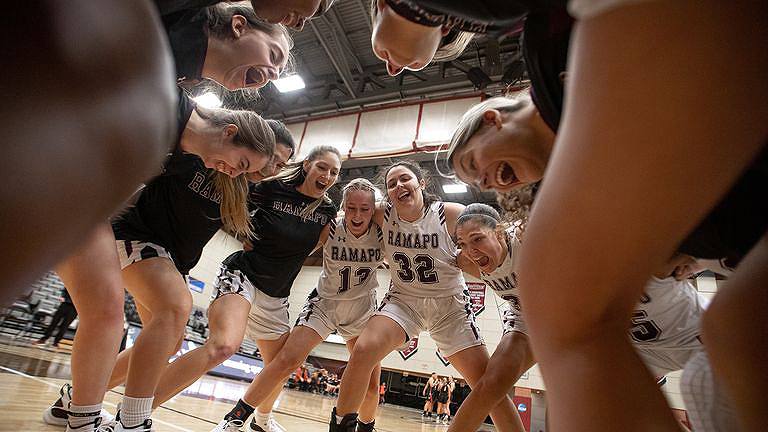 The Ramapo College women’s basketball team improved to a 4-0 overall record in non-conference action with a 61-47 win over York College on Wednesday, Nov. 16 and a 77-51 win over Centenary University on Saturday, Nov. 19 at home.

Throughout the entire second half, the Roadrunners did not give up the lead to earn the road victory. The Roadrunners shot 38% (23-60) from the field and 76% (13-17) from the free throw line. The defense forced 20 York turnovers in the game which led to 28 points for the Roadrunners.

Shannon Burns tied her career high as she led the Roadrunners with 16 points and added a team-high 12 rebounds for her first double-double of the season. Burns also posted three assists, two blocks and two steals. Jada Thompson added 13 points, eight rebounds and a team-high six steals.

Ramapo’s winning streak continued against Centenary University. The Roadrunners shot 45% (29-64) from the field, 34% (8-23) from the three-point line and 68% (11-16) from the free throw line. The Ramapo defense forced 22 Cyclone turnovers, which led to 19 points for the Roadrunners.

Ramapo also scored 45 points in the paint and held their largest lead in the third quarter, as Olivia Johnstone hit a three-pointer for a 33-point lead, 67-34.

The Roadrunners also opened up their New Jersey Athletic Conference play this week at home against Rutgers-Newark University on Tuesday night, winning their fifth straight game. The Roadrunners won 79-44 over the Scarlet Raiders, to move themselves 1-0 in conference play.

Ramapo had a strong start to the game giving themselves a 10-point lead, 14-4 in the first quarter. They kept up this pace adding 22 in the second quarter to give themselves a 36-18 lead at the half.

“I think everyone on our team is motivated by last year and it has played a part in our team’s strong start to this season,” Burns said. “It was most of our first year playing college basketball last year, so we are more experienced and driven to perform better and outlast other teams this year.”

Burns shared that “The main goal that the team is looking to accomplish this season is to play together and beat NJAC competitors, even though we know each game will be tough and very competitive.”

The Roadrunners return to action on Saturday, Dec. 3 at 1 p.m. when they host Stockton University in a NJAC conference game.