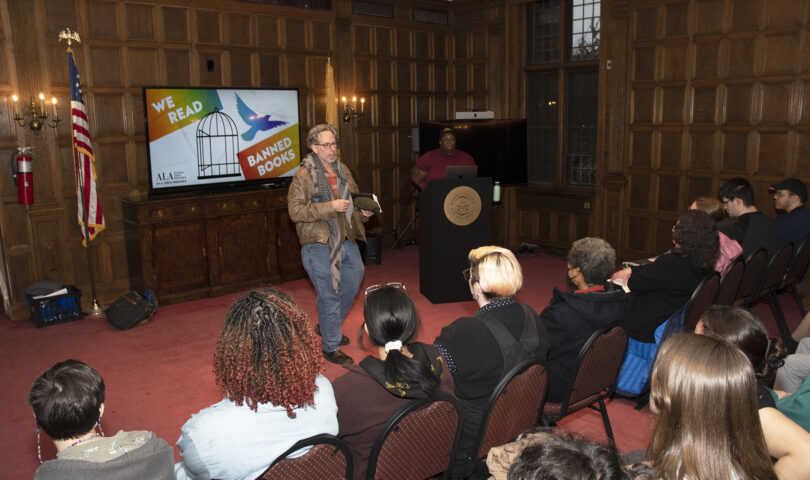 The topic of banned books has been a popular one on Ramapo’s campus this semester, and Banning Black Books, a presentation by Professor Indya Jackson, added an important perspective to the conversation. Jackson, a professor of African American literature, discussed the connection between empathy and literature and provided a history of the censorship of Black books.

Professor Ed Shannon, president of the Ramapo State Federation of College Teachers (AFT 2274), introduced the event by explaining the thought process behind it. He said that because of the recent spike in book bans and censorship, he wanted to emphasize to the Ramapo campus that AFT 2274 is “committed to academic freedom.”

Jackson started her presentation by inviting the audience to remember their first favorite book.

“I bet my last dollar that your first favorite book offered some kind of valuable message… to the development of young children,” she said.

She went on to share that her first favorite book was “The People Could Fly” by Virginia Hamilton, a collection of African American folktales. The folktales focus on enslaved African Americans who discover their gift of flight that allows them to fly away from their lives on the plantation. The part that stood out most for Jackson was the book’s message of hope and possibility.

“The work’s fantastical depiction of escape, of freedom, it empowered me as a little girl,” she said.

Jackson highlighted the importance of empathy in reading any kind of literature. She believes that it’s her responsibility as a professor to engender more empathy in every student that passes through her classroom.

“It’s a task that I share with the great authors and works of literature that my students are assigned,” she said. “Empathy is the charge of literature.”

When it comes to books that focus on Black perspectives, Jackson asks: “What does it mean that the country bans and censors books that make readers empathize with Black people?”

Censorship of Black writers isn’t anything new. While book bans may seem like a recent development, classic and contemporary Black literature alike –  whether it’s Zora Neale Hurston’s 1937 novel, “Their Eyes Were Watching God,” or Mikki Kendall’s 2020 nonfiction text, “Hood Feminism” – have been under attack for decades. It’s not just contained to adult literature either. Children’s and young adult novels, such as Angie Thomas’ “The Hate U Give,” have also been targeted in recent years.

Jackson pointed out that many of the targeted books often focus on intersectional identities, whether it’s being Black and queer, like Alice Walker’s “The Color Purple,” or Black and disabled, like Ralph Ellison’s “Invisible Man.” Of course, what all the books have in common though is that they tell about Black American experiences of oppression in the United States.

“Reading any of these works that I listed requires a degree of empathy for the unique racialized experiences of Black Americans,” she said.

Jackson reflected on the connection between the censorship of Black authors and the historical Black Codes that outlawed Black people from learning to read and write. She said that if enslaved Black people were illiterate, it meant that they could only communicate their stories orally, limiting them by time and place.

She also cited instances of censorship throughout the 20th century that she feels relate to the current day. This includes Claude McKay, who was placed under FBI surveillance for his poetry about Black resistance during the Harlem Renaissance, as well as the hip-hop group, 2 Live Crew, that faced lawsuits about obscenity in their music during the 1990s.

“Can it be a coincidence that Black people were once not allowed to read and write, and today, governments are suggesting works by Black authors should not be read?” she asked. “Some things are by design. Some things are simply racist.”

Jackson ended her talk with one request for attendees.

“While I want you to hold onto empathy for dear life, I also want to ask you to get a little angry,” she said. “Be a little bit angry about what’s happening… and resist.”