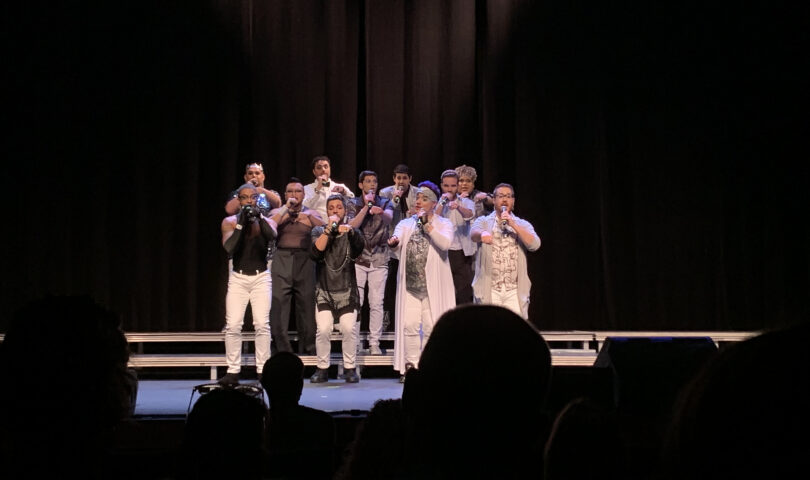 In partnership with the Women’s Center and LGBTQ+ Services, the Berrie Center welcomed Tonewall, the queer a capella band from the New York City Gay Men’s Chorus, on Dec. 1. Tonewall presented a performance titled “Standing Room Only,” which is not only a fun concert, but also a call to action to stand with the LGBTQ+ community as a member or ally.

Upon hearing about this wonderful group, I was intrigued and knew I had to see them perform – and they did not disappoint. From the amazing costumes to the equally awesome harmonies and melodies, this was not a performance to miss. Throughout the performance, the audience was encouraged to sing and dance along, and I can guarantee there was a lot of audience participation.

In between each song, a different member of the 12-person group stepped forward to introduce themselves and share a story. Some were personal stories about their home lives and coming out experiences while others were about LGBTQ+ history, such as the Stonewall riots.

It was also great to hear how Tonewall has shaped the lives of each member. Many said they feel it is a second home where they can be themselves and do an activity they love – which in this case is performing and educating others. The show was very entertaining with the various personalities all coming together to execute great numbers, but it was equally great to learn about LGBTQ+ history through these performances.

There were some somber moments of the show, but they lightened this up by mentioning the advances the LGBTQ+ community has made throughout the years as well as recent breakthroughs. There was also a beatboxing lesson that everyone got to participate in during the mini-intermission. Going in expecting to watch a show and coming out having received this immersive experience was a pleasant surprise.

What this group truly represented was hope for the future and empowerment. Coming out of this show, I felt powerful and I wanted to make a difference, which I believe is the reason they do what they do.

Overall, Tonewall gave a lovely performance of songs ranging from “Believe” to “Brave” to “Somebody to Love.” They even shared some tunes for the upcoming holiday season. They conveyed their message of standing up for what you believe in and I can say that their performance was very empowering as a viewer. If you ever get the opportunity to see them perform in the future, I would wholeheartedly recommend it!