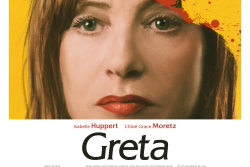 Greta is an enjoyable take on classic horror genres

Photo courtesy of Wikipedia Going into Neil Jordan’s “Greta,” it’s important to know that, despite the film’s marketing campaign intended to convince audiences that it’s meant to be taken seriously, it’s actually a campy take on the “creepy stalker” sub-genre of thriller/suspense filmmaking. The film’s overall concept has been practically […]