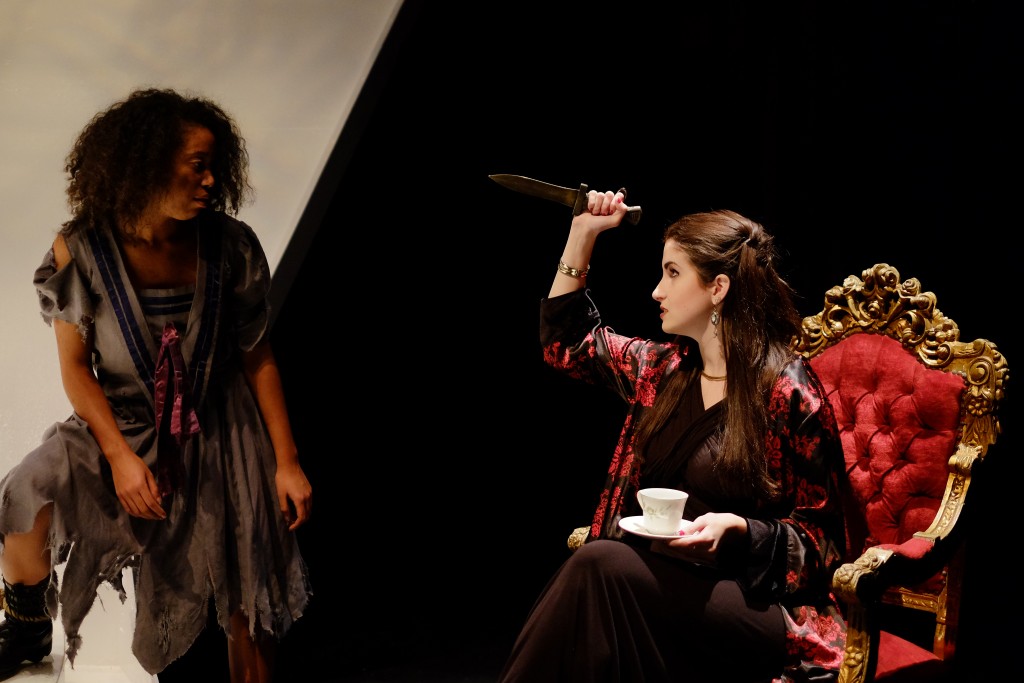 Iphigenia and Other Daughters premiered in the Adler Theatre on Friday, making it the first main stage show of the Fall 2016 semester. Peter Campbell, associate professor of theater history and criticism, directs the show, which will run for four more performances this week.

“This play is about human cycles and desires for violence and revenge, especially the roles that women play in them. This modern retelling of the ancient Greek stories of the daughters of Agamemnon and Clytemnestra explores the various sacrifices expected of women, from the everyday to the most violent,” Campbell wrote in his director’s note.

For unfamiliar audience members, Agamemnon and Clytemnestra were the king and queen of the ancient Greek kingdom of Mycenae, according to Greek mythology. The king is sent to lead Greek forces in the Trojan War, but before he can set sail, he is told by the goddess Artemis to sacrifice his oldest daughter, Iphigenia. Clytemnestra, in some versions of the legend, kills Agamemnon to avenge her daughter’s death. "Iphigenia and Other Daughters," written by Ellen McLaughlin in 1994, explores these stories retold with a modern interpretation through the help of the set in particular.

The show kept a low profile on social media in order to hide spoilers, according to Michelle Santucci, head of marketing for the show. This media blackout of sorts has been successful in concealing connections between the set and the story in particular. The set, seemingly plain, is more of an environment – the limited seating and intimacy of the Adler Theatre allows audience members to completely immerse themselves in the world of the play. The set is more than just an intimate space; it plays an integral role in the story itself.

The simplicity of the set also leaves the small cast exposed ­– a challenge that each actor rises above, delivering performances which make deep connections with the audience. The technology integrated at the beginning of the show is quick to establish this connection, as close-up shots of Iphigenia, played by freshman Akdeniz Rysmendieva, and Clytemnestra, played by senior Taylor Vitelli, highlight both actresses’ ability to deliver emotionally charged monologues relying only upon their delivery and facial expressions.

Their talent is later joined by Liz Gonzalez, a senior playing Chysothemis, Amber Walker, a junior playing Electra and Richard Bruno, a sophomore playing Orestes, who each match Vitelli and Rysmendieva, creating a full-bodied cast that keeps the audience easily engaged with the story.

“I love how the technical aspects of this production have worked with the actors,” Campbell said. “There are surprises and quite a bit of suspense. And the actors break my heart in every performance.”

The actors, particularly Bruno, seemed to agree that acting in Iphigenia was a unique experience.

“The most challenging part of this show was to be an emotionless, vulnerable character. My character has unique traits; Orestes has zero emotion. Being that it isn’t a normal stage, I had to get used to the fact that I didn’t have to cheat-out to the audience,” Bruno said.

The story itself, although well conveyed through the acting and production aspects, leaves audience members with a lot to chew on: it comments upon society’s treatment of women in ancient Greece and beyond.

“For the women in that culture, and still to a great extent for women and men in our culture, the only way to create your own narrative, your own story, your own myth, is to break out of one that has been given to you,” Campbell explained in his director’s note.

It seems that Ramapo’s version of "Iphigenia and Other Daughters" does just that. The play is a unique experience, creating an intimate world for actors and audience members that breaks the expectations of a Ramapo main stage performance.