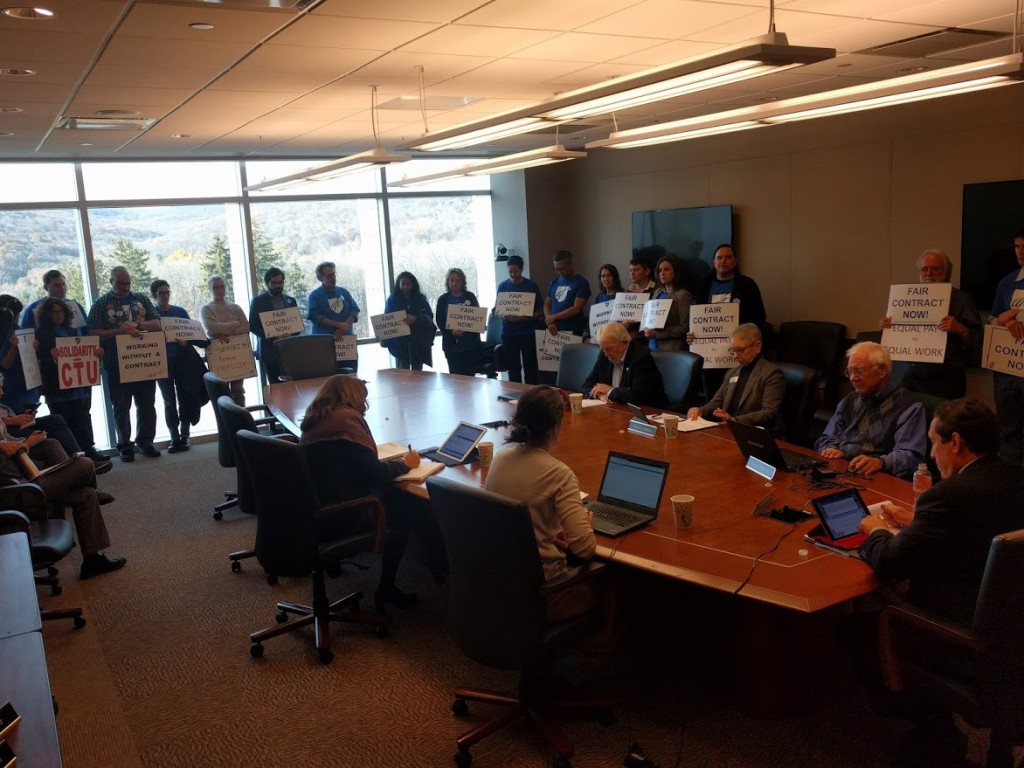 Dozens of professors, faculty and supporting students filled the conference room where the Board of Trustees meeting on Wednesday, Nov. 21 was being held.

The American Federation of Teachers (AFT) is a union for faculty and professional staff. The union held a statewide demonstration to draw attention to an expired contract that has not yet been renewed or renegotiated.

Jude Pernot, the head of Ramapo’s AFT office, stated, “The purpose of all of the events on the Statewide Day of Action is to inform the Ramapo community and raise awareness that 608 people that work at Ramapo have been working without a contract since July 1, 2019.”

Being members of AFT, professors and faculty alike gathered on the fifth floor of the Anisfield School of Business, directly outside of the doors where the Board of Trustees meeting would be held minutes later.

As the meeting started, the group of professors and staff wearing matching AFT t-shirts filed into the room, signs in hand. These signs held slogans such as “Fair Contract Now,” “Working Without a Contract” and “Equal Pay for Equal Work.”

The trustee meeting's main purpose was to discuss the search of potential nominees for the president’s position, as President Peter Mercer announced earlier this semester that he would be stepping down from the presidency in spring 2021.

Chair William F. Dator, whose term ended in June 2017, ordered the meeting to start at 2:04 p.m. The meeting did have a quorum of trustee members, many of whom phoned in.

Chief of Staff Brittany Williams-Goldstein, who also acts as the board’s liaison, announced to the room that if anyone would have liked to directly speak or comment during this meeting, they were welcome to after they formally signed in as participants.

No one in the room signed in, deeming the occurrence a silent protest.

Dator started off the meeting by mentioning the events during Founders’ Day which revolved around Ramapo’s 50th anniversary celebration. He stated that he is “thankful for the events that students, faculty and staff put forth.”

Vice Chair Susan A. Vallario changed the topic to their main point of issue: the presidential search. The professors that lined the room blankly stared at Vallario as she attempted to converse with them about the search for a new president.

In the middle of her listing off the planned timeline for the presidential search, the protestors uniformly exited the room. As they left, Vallario stated, “We’re sorry this is boring!”

For months, the majority of Ramapo professors had flyers hanging outside of their office doors which stated, “Working Without a Contract since July 1, 2019.”

“For decades, college and university presidents have been hiring more and more contingent faculty instead of full-time professors,” AFT states. “In an effort to expand this approach, they are creating new faculty positions with little job security that would undercut tenure-track professors, and they are making contract terms shorter for professional staff.”

Members of AFT handed out flyers with multiple phrases throughout the day before and after the board meeting, one of which included the phrase, “When politics come before people, we all suffer.”

Once President Mercer entered the room, the Board of Trustees meeting was deemed closed to the public.