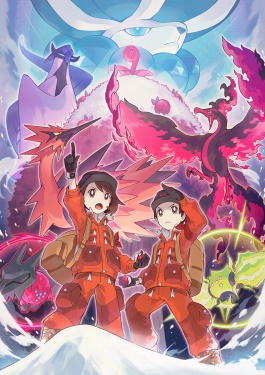 Despite its chilly setting, the "Crown Tundra" DLC turns up the heat in “Pokémon Sword'' and “Pokémon Shield” with new game modes and new quests for legendary Pokémon. The "Crown Tundra" is the second part of the Expansion Pass for both games, being preceded by the tropical “Isle of Armor” released back in June.

The "Crown Tundra" transports players to the southern lands of the Galar region. When arriving at the "Crown Tundra" for the first time, players walk in on a father-daughter argument. Here, we meet Peony and his daughter Peonia. Peonia wants to go on “Dynamax Adventures'' while Peony wants to bond with his daughter over a legendary Pokémon expedition. The player takes Peonia’s spot on the expedition, launching the DLC's story.

Peony tasks players with three legendary expeditions to go on. Each leads to encounters with different legendary Pokémon. The first expedition has the player helping the king Pokémon Calyrex reunite with his noble steeds Glastrier and Spectrier. Players sadly can only choose one noble steed to catch.

The second expedition has the player solving ancient riddles to catch the “Regi” family of Pokémon, consisting of Regirock, Regice, Registeel and the new Regieleki and Regidrago. Unfortunately, players can only choose one new Regi to catch.

The third expedition has players chasing the regional variants of classic legendaries Articuno, Zapdos and Moltres around the Galar region. Chasing these bird Pokémon across the map was the toughest expedition due to their high speeds.

The new “Dynamax Adventures” game mode debuts in the "Crown Tundra.” Here, players can team up with three friends online or three computer players offline to compete in a gauntlet of “Max Raid Battles” that leads to a battle with a legendary Pokémon.

As an added challenge, players must use rental Pokémon instead of their own, with the rental Pokémon being randomly generated each time. Players can choose to take home any rental Pokémon or legendaries they catch in the duration of a run.

While I enjoy the added challenge, it is frustrating when the type of Pokémon you need to beat the legendary does not spawn on the map. This can ruin a run before it starts.

A perk of "Dynamax Adventures" is catching shiny versions of legendary Pokémon. Shiny Pokémon are special color variants different from their original colors, which Pokémon fans go nuts over. With the odds of getting a shiny legendary being 1/100 (with the shiny charm item), this is by far the easiest way to “shiny hunt” legendaries that are otherwise difficult to obtain.

Additionally, one hundred Pokémon not present in the base game of “Sword” and “Shield” are now playable with the release of the DLC. These Pokémon can be captured in-game or transferred to “Sword” or “Shield” via Pokémon Home.

Upon completing the story of the "Crown Tundra,” players are invited to compete in the new “Galar Star Tournament” game mode. Here, players team up with iconic Galar gym leaders in double battles against one another. These battles lead to fun banter between characters, resulting in fun fan service moments for players.

The “Pokémon Sword” and “Pokémon Shield” Expansion Pass retails for $29.99 in the United States. Will you be venturing into the "Crown Tundra" with the Expansion Pass? If so, bring a warm jacket and plenty of pokéballs.