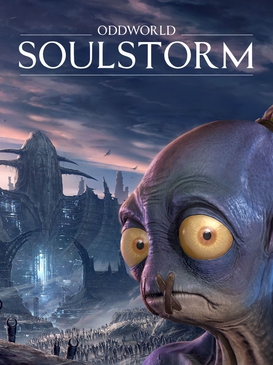 There are many underrated series in PlayStation's history that are not as recognizable compared to popular franchises like “Ratchet and Clank” or “God of War.” One of these series is “Oddworld.”

First coming into existence with the 1997 PlayStation game “Oddworld: Abe's Oddysee,” the series has started a comeback of sorts in recent years, beginning with the 2014 remake, “Oddworld: New ‘n’ Tasty!”

After critical and commercial success abounding from this PS4 release, the publishers at Oddworld Industries worked with several game developers to remake the second game in the series, “Oddworld: Abe’s Exoddus;” hence, after much anticipation, “Oddworld: Soulstorm” was finally released on the PS4, PS5, and Windows on April 6.

With the release being made free for PS Plus subscribers, many experienced Oddworld for the first time. Luckily, even though the game will definitely not be to everyone’s taste, there is just enough grim beauty and charm in gameplay that make this grimy journey worth taking.

Focusing on Abe after the events of the first game, he and other members of his species, known as the Mudokans, have escaped slavery and consumption at the hands of RuptureFarms CEO Molluck the Glukkon. Despite the Mudokans taking refuge in underground chambers, Abe and the others are quickly discovered by Molluck and forced to relocate.

After Abe separates from his peers and escapes, he learns that he must “find the Keeper.” Thus, Abe must travel across Oddworld once again, saving Mudokans and cleverly taking out his enemies to save his people and find his voice.

Oddworld has always had a distinctive look to it, and this reimagining is no exception. Everything looks both grimy and beautiful, with no two sections feeling exactly the same. Mudokans are at the bottom of Oddworld’s food chain, and that sensation resonates through the towering and claustrophobic settings, both natural and artificial. However, everything has a certain level of detail and creativity to it that can only be enjoyed.

Gameplay-wise, “Soulstorm” feels like an old-school puzzle platformer, which makes sense considering when the original games first came out. Considering that Abe himself is very fragile as a player character, the ways one handles enemies are very creative. Every scenario where you have to deal with enemies will test your brain in challenging yet enjoyable ways. Dying a lot is a guarantee during the average play-through, and even though these moments can feel very tedious at times (especially when death occurs in the same location), the rewards are often worth it.

Furthermore, one of the sections that may be hit-or-miss depending on the type of player is the “escort mission” part of “Soulstorm.” One of the core mechanics of the game is that hidden in each level are a certain amount of Mudokans. Upon finding them, Abe must escort them to the end of each section, all while directing them as to when to stop, run past traps, choose weapons they use against enemies, and when they use them.

While there is a lot of variety in how these followers are utilized, they are incredibly vulnerable. If a player does not have the patience to go through these sections strategically, they may not appreciate these sections. Luckily, the game accommodates both player types, albeit in very different ways.

“Oddworld: Soulstorm” is an incredible reimagining of the series that introduces itself to a new generation with all of its quirks. Even though it can be very tedious at times, the game is beautiful and plays well if one is patient with its mechanics. The game is a great introduction to “Oddworld,” regardless of one’s prior knowledge of the game, and it is sure to be a hit that can help introduce players to the new generation of PS5 gaming.