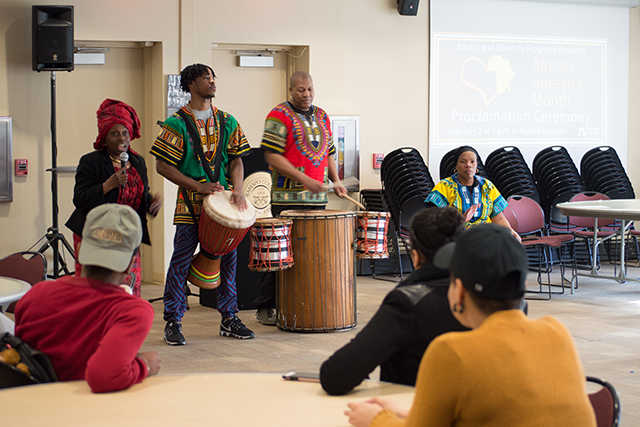 She went on to explain that the celebration came from Negro History Week, started by historian Carter Woodson and his organization, the Association for the Study of Negro Life and History, in 1926. The second week of February was chosen to coincide with the birthdays of Abraham Lincoln and Frederick Douglass.

“The event inspired schools and communities nationwide to organize local celebrations, establish history clubs and host performances and lectures,” said Quick. “By the late 1960s, thanks in part to the Civil Rights Movement and a growing awareness of black identity, Negro History Week had evolved into Black History Month on many college campuses.”

That is how it became the nationwide observance as we know it today.

“President Gerald R. Ford officially recognized Black History Month in 1976, calling upon the public to seize the opportunity to honor the too often neglected accomplishments of black Americans in every area endeavored throughout our history,” said Quick.

After the proclamation, Quick invited members from Chiku Awali African Dance, Arts and Culture to perform for the audience.

Nana Yaa Oforiwaa Amanfo I, also known as Alexandreena Dixon, is from the Bepoase region of Ghana and the founder of Chiku Awali African Dance, Arts and Culture.

“We’re gonna make sure that you liven the room up. We’re gonna even do a little movement ourselves,” said Dixon as she taught a group of students and faculty the words and dance to Fanga Alafia, a Nigerian folk song.

Dancers then showcased their skills through several traditional dances meant to demonstrate their strength.

Finally, Dixon answered questions from the audience about her heritage and experiences.

“There were many things I didn’t expect,” she said in regard to a question about her first visit to her home country of Ghana. “You hear the stories, but until you are actually there in person and you see things like the slave dungeon and the last bath … there are no words for it.”

She also discussed the difficulty many African Americans have with their heritage.

“I think that most Africans have two emotions toward it. One of them is that I am thankful for where I am in this country to be able to benefit from some of the freedoms that we have,” Dixon said, “but then feeling ‘why did they take me?’ because if I were still [in Africa], I’d be even more powerful.”

By founding Chiku Awali African Dance, Arts and Culture, Dixon hopes to be able to bring home her experiences from Ghana and share them with those who will never get the chance to visit.

“My mother had gone to Africa 13 or 14 times, but she never brought home that experience to us,” Dixon said. “It wasn’t until I started this organization, in tribute to her legacy and to try and give my community information about not just African American history, but African history, that I began to realize that you do have to have a connection in some way with the continent through learning, studying and understanding what it meant for our people.”