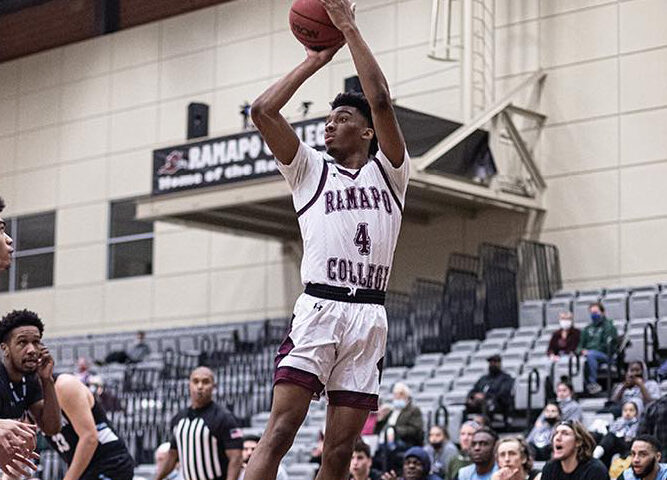 It was a tough loss for the Ramapo College men’s basketball team on Saturday afternoon as they fell to Farmingdale State College on the road in their first game of the season. It was a battle until the end, but the Rams were able to hold the lead in an overtime win, defeating the Roadrunners 74-68.

The two teams played a very close first half, where neither team was able to break out to a lead of more than five points. Ramapo seemed like they would be going into the locker room ahead due to a pair of free throws with a minute left in the first half. But in that time span the Rams scored four straight points to take a 35-33 lead over the Roadrunners into halftime.

In the second half, it seemed like the game might be escaping from Ramapo. Farmingdale led by as many as 10 points throughout the half, and kept a 10-point lead with eight minutes remaining. However, Ramapo did not get discouraged, and battled back with a 10-1 run to come within one with two minutes remaining, 57-56.

Will Brown sank a basket for Ramapo before Shane Rooney converted on one of two free throws to tie the game, 61-61 with a minute left in the second half. Neither team could score in the remaining seconds of regulation, sending the game into overtime.

In overtime, Farmingdale’s Tre Riggins converted a pair of free throws before Brown made a basket for the Roadrunners to tie the game, 63-63. The Rams then went on a mini 6-2 run, including a three-pointer from Zamere McKenzie for a 69-65 lead with two minutes left.

Ramapo’s Peter Gorman was the game’s leader in points, scoring a team high of 22. Gorman also recorded eight rebounds, three steals and one assist. Other notable contributions for Ramapo were from Rooney and Brown.

Rooney recorded his first double-double of the season, scoring 15 points and collecting 11 rebounds. Brown added 19 points, four rebounds and two steals. Overall, the Roadrunners shot 38% from the field and 73% from the free throw line.

Prior to the game, the New Jersey Athletic Conference (NJAC) announced the 2022 NJAC Men’s Basketball preseason poll this morning and the Roadrunners were picked to finish seventh along with being the league’s dark horse.

Ramapo returns to action on Saturday, Nov. 19 when they host Purchase College for a non-conference game at 3 p.m.